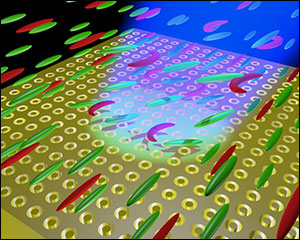 Flat panel displays and many digital devices require thin, efficient and low-cost light emitters. The pixels comprising the various colors on the display are typically wired to complex electronic circuits, but the A*STAR display technology requires a much simpler architecture.

“Our color filters are a lot thinner and more compact than conventional thin-film-based color filters,” said Jing Hua Teng of the A*STAR Institute of Materials Research and Engineering. “The colors of these filters can be tuned with ease, so they are very versatile in applications.”

Surface plasmons — the collective motion of electrons — on the surface of a patterned gold film absorb light at wavelengths dependent on the pattern details. If the patterns are narrow, nanometer-sized rings are cut out of the film. As the diameter of the rings changes, so, too, does the color of the metal film. Pixels of different colors can be realized by simply patterning the rings of varying sizes across the same gold film.

To realize a full display, however, each pixel must be turned on and off individually. This is where liquid crystals come in.

Liquid crystals can be switched between two different states by external stimuli, such as ultraviolet (UV) light. In their normal state, the crystals let visible light pass through so that the pixel is turned on. But when UV light is also present, the structure of the liquid crystal molecules changes so that it absorbs visible light, making the pixel go dark. This process can be repeated over many cycles without degrading the device itself.

Schematic of the tunable color filter. The combination of a gold film with ring-shaped holes and the use of liquid crystals (red and green) enables pixels of a defined color that can be turned on and off. ©2012 Y.J. Liu

Although the device works in principle, it remains a concept on the drawing board for now, Teng’s team said. There are still many issues to overcome, such as optimization of the switching speed and the contrast between “on” and “off” states. In future work, the team will need to extend its work so the device can serve a larger area and produce the fundamental colors red, green and blue.

Teng said he and his group are quite optimistic that they will achieve this soon.